Now that we’ve fully covered the general topic of precious metals as investments, it’s time to get a little more specific. When we refer to “precious metals”, we are primarily talking about the two metals we sell here at KJPL Bullion gold and silver.
Gold and silver vary from each other in quite a few ways, so we wrote this article to specify all the differences and highlight the advantages and disadvantages of each metal. The topic we will be covering for gold and silver includes each metal’s price and the price ratio between the two, each metal’s liquidity, storage of the metals, and the markup for buying each metal.

The Spot Prices of Gold and Silver
Gold and silver prices move significantly year to year, so the best way to get a general gauge of the prices of these metals is to look at semi long-term charts. Below we have the gold and silver price charts dating from January 2000 to January 2012

As you can see above, gold has ranged from ~$265/ounce to ~$1,850/ounce over the past 12 years, with a generally upward trend over the time period.

Silver has followed a fairly similar pattern, ranging from ~$5/ounce to ~$45/ounce over the past 12 years, with a generally upward trend over the time period.
What we can take from the above charts is that gold, as of late, has been significantly more expensive than silver. This price relationship between gold and silver exists despite the fact that there is actually much more aboveground gold in existence than aboveground silver; current estimates place aboveground gold at ~5 billion ounces and aboveground silver at ~450 million ounces (http://silverstockreport.com/essays/Silver_vs_Gold.html).
The commonly accepted reasons why gold is more expensive than silver, despite its relative abundance, are that gold is more widely used in jewelry, gold is seen as more of an “alternative currency” than silver, and gold is in higher demand by both central banks and individual investors than silver.

The ratio between the gold and silver spot prices is called the gold/silver ratio, and is often used by investors to determine if either of the metals is undervalued as compared to the other. The gold/silver ratio measures how many ounces of silver you can buy with one ounce of gold. Below you can see the 10-year gold/silver ratio chart: 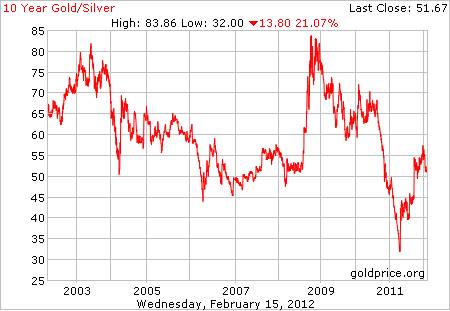 The gold and silver markets are about as liquid as it gets, so you never have to worry about supply shortages or getting “stuck” with metal. If we had to give a nod to one or the other, we’d say that gold is the more liquid of the two metals due to its greater demand as well as supply over silver.

When it comes to storage and transport, gold definitely gets the nod over silver. You can fit many more dollars worth of gold than silver into the same sized safe or shipping package.
Not only is gold worth significantly more per ounce than silver, but also it is the denser of the two metals, making a specified volume of gold worth far more than an equal volume of silver.